The home page
The Power Programs homepage has been online in some fashion or another for an 'internet age'. The very first version is from late 1995 - over fifteen years ago. To put that in perspective, that is from the era when Microsoft just about released the first version of Internet Explorer and people were still widely using Mosaic and Netscape as their browser of choice.

Sadly, I no longer have an archive of that version at the ready, nor any screenshots - but I'll keep searching! 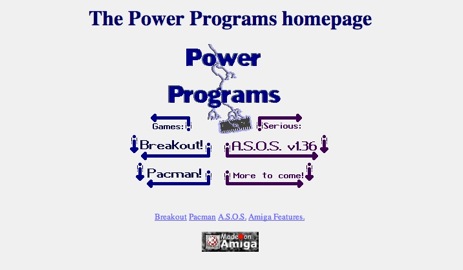 The site used to be hand edited HTML, first with a standard text editor* and later in the Spider Writer HTML Editor. Between 2010 and September 2013, the site used the GetSimple CMS**, which allowed me to edit pages anywhere and anytime. Since the 2nd half of September 2013, I've been using RapidWeaver on my Mac Mini to create this site. Returning to the use of offline created HTML*** after an unfortunate event on September 4th, 2013 - the date my site was hacked and defaced.

Originally, the site was about my self made software, serving news, plans and downloads of my hobby projects for the Commodore Amiga. It had screenshots, descriptions and more about my programs, including Breakout and A.S.O.S. At one point, I added a Windows and Commodore 8 bit section but never actually put anything in there!

With the site relaunching in late 2010, I decided to broaden the approach and include not just self made software downloads, but also articles about Commodore computers in general and the Commodore 64 and Commodore Amiga in particular.

Since a lot of Commodore computers use the 6502 processor and I've always been rather fond of the architecture, I also added the 6502 Corner for articles about the 6502 series.

*) Notepad, VI / VIM, Wordpad, EMACS (or the Amiga version Micro EMACS), you name a text editor, I probably tried it and used it for editing the site.
**) Because it really is simple to use and allowed me to concentrate on writing content instead of having to focus on the technology behind it.
***) The idea being that a site without online CMS features is harder to deface than one with CMS features.

That being said, RapidWeaver is a very neat program that is both easy to use and flexible at the same time. Like GetSimple, I can concentrate on writing content and don't have to worry about making proper HTML. And just like GetSimple, it still gives you the freedom to use raw HTML whenever you like.
Back To Top